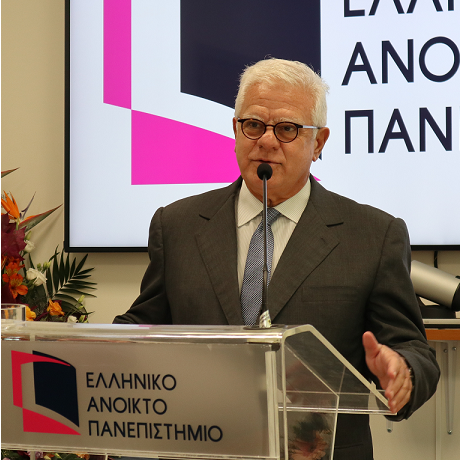 Ricardo Mairal Usón is Full Professor of Linguistics at UNED since 2002. He has been the Vicerrector for Research and Knowledge Transfer (2013-2016), Vicerrector for Teaching Staff and Academic Planning and First Vicerrrector (2016-2018), and he is currently the Rector at the UNED. He has also been the President of the Spanish Association for Applied Linguistics during 2011-2017.

Prof. Dr. Theo J. Bastiaens is rector of the Open University in the Netherlands. He is professor of Educational Technology and has contributed to numerous international publications in his field. Bastiaens was Vice-President for Digitalization and Internationalisation at the Fernuniversität in Hagen.

Josep A. Planell Estany (born Barcelona, 1951) graduated in Physics from the University of Barcelona in 1975 and earned his doctorate in Materials Science from Queen Mary, University of London in 1983. Since 1992 he has been full professor in the Materials Science and Metallurgy department of the Barcelona School of Industrial Engineering at the Universitat Politècnica de Catalunya (UPC). He was Director of the Institute of Bioengineering of Catalonia (IBEC), linked to the UPC, from its establishment in December 2005 until April 2013, when he took office as President of the Universitat Oberta de Catalunya (Open University of Catalonia, UOC).

Niki Kerameus is a Greek lawyer and politician and the current Minister of Education and Religious Affairs.

Alexander Knoth works as Chief Digital Officer (CDO) and Head of Section Digitalisaton at the German Academic Exchange Service (DAAD) in Berlin and Bonn. He is responsible for the strategic planning and management of DAAD’s digitalisation activities. He is leading several research and development projects. Alexander has gained experiences in interdisciplinary and international co-teaching scenarios, connecting classrooms around the globe.

Fuat Erdal is full professor of economics. He graduated in economics from Middle East Technical University (Ankara) and got his MA from Leeds University and PhD from Nottingham University. His main research areas are macroeconomics, development economics and international economics. Having acted as department chair, dean and vice rector in various universities, he is currenty the rector of Anadolu University (Eskisehir, Türkiye).

Head of the Cybermetrics Lab

Isidro Aguillo is the head of the Cybermetrics Lab, a group of the Institute de Public Goods and Policies (IPP) of the Spanish National Research Council (CSIC).

He is the editor of the Rankings Web (Webometrics), including the Ranking Web of Universities (since 2004), Research Centres (since 2006), Hospitals, Repositories and Business Schools (2008-2014) and a major contributor to the Scimago Institutions Ranking.

Dr. Olaf Zawacki-Richter is a Professor of Educational Technology at the University of Oldenburg (Germany) and the Dean of the Faculty of Education and Social Sciences. He is the founding Director of the Center for Open Education Research (COER) at Oldenburg University.

He is Associate Editor of the journal “Distance Education” (Australia) and the “Online Learning Journal” (USA). Together with Terry Anderson, he edited the book “Online Distance Education – towards a research agenda“ published by Athabasca University Press (open access).

Nikos E. Papadakis is Professor and former Head (2009- 2011) of the Department of Political Science, at the University of Crete (UoC). He is a Distinguished Visiting Professor at the Academy of Globalization and Education Policy (AGEP) of the Zhengzhou University (ZZU), China. He is a Member of the Scientific Board of the National Centre of Public Administration and Local Government (EKDDA) of Greece, while he is the Director of the Centre for Training and Life Long Learning of the University of Crete (KEDIVIM- UoC).

Catherine Mongenet is professor in Computer Science. From 2009 to 2012, she has been vice-president of the University of Strasbourg in charge of the digital strategy. In May 2013, she was appointed Policy Officer at the French Ministry of Higher Education in charge of the digital strategy. Since September 2015, she is the CEO of "France Université Numérique". The objectives of this public organization are to manage the FUN MOOC platform and its evolutions, to develop new partnerships and activities, especially in the context of life-long learning education and to increase its Francophone and international visibility.